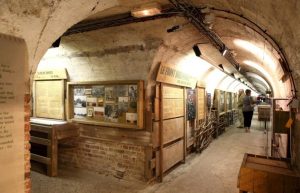 Located in the centre of Albert, a town which is the symbol of the 1st World War, this museum goes back over the soldiers’ life in the trenches during the offensive of 1 July 1916. There are about 15 alcoves and display cases in a 230 metre-long underground that was used as an air-raid shelter during World War Two. Sound effects, images and lights throw the visitors into the daily life experienced by these soldiers. New exhibit on the theme of aviation.